Anyone interested in a convention report covering five versions of the same RPG scenario, with no pictures of the actual content (because I was too busy running the games to faff around with any of that Instagramming-pictures-of-your-dinner nonsense), plus a single insanely casual game of Hordes vs. Warmachine? 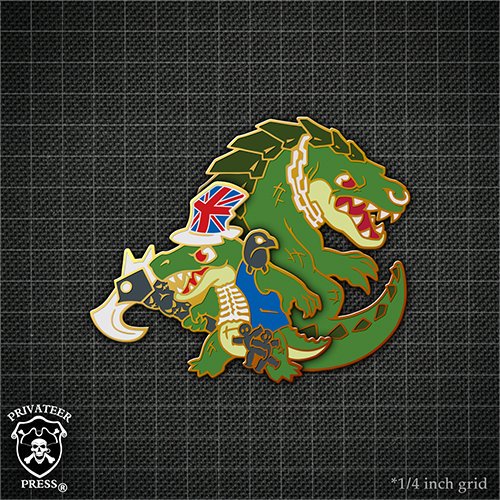 Also, an obnoxiously British gatorman and his friend.

I hope so, ’cause that’s what you’re getting.

I have to confess that despite having forty days on the clock, I didn’t actually achieve everything on my to-do list. The models didn’t have much more paint on them than in that last post, the last player character model was actually bought five minutes after the first demo session ended, the scenario wasn’t tested and the Mammoth is still in bits. The maps, however, looked smashing, mostly because I had nothing to do with them other than describing what I wanted to Robin and then leaving well alone for a few days.

Encounter 3 – base under siege

The scenario itself was pretty straightforward: the PCs had been captured by Skorne and offered their freedom if they agreed to help the Skorne out in attacking a Khadoran border fortress, by delaying or destroying the reinforcements on their way to the fort and then meeting up with the Skorne to support the attack. Each of the PCs had a paragraph or so of motivational notes designed to thicken the plot and encourage arguments, betrayals and contrariness. Most of the NPCs were entry-level mooks, but the commanders of the Skorne assault and Khadoran defence were statted out like proper characters with about 50 XP sunk into them – in other words, they’d mulch any single PC who tried to take them on.

Only one group out of five stuck by the Skorne, honoured the arrangement and helped Razaak the Undying seize the fortress and claim his prize. One group attempted to betray him, got caught out, and managed to escape their bonds in time to backstab him during the attack. Another group fragmented, ended up killing both major NPCs and founded a petty mercenary kingdom in the deep Khadoran tundra. Yet another switched sides and agreed to work with the Khadorans, earning themselves a contract with the Greylords Covenant, and the last lot were going to play it straight but lost their cool in the heat of battle and decided to slaughter Razaak and his army before they were halfway across the field. (In retrospect, naming him ‘the Undying’ was asking for trouble…) I’m proud to say that at least one PC was taken out in single combat with the Undying in each session, though, and that – exactly as planned – every group had some internal tension over whose side they were on.

Spending the weekend running the same scenario allowed me to directly compare the playstyles to which I was exposed – the hardcore roleplayers who went back to try and negotiate with Razaak, the competitive Warmachiners who poked at the edges of the scenario and looked for ways to break it, the first-time roleplayers who took my advice about using everything on the character sheet to heart, and the one group who spent at least sixty of their hundred and eighty minutes coming up with increasingly elaborate plans to delay the Khadorans, blame the Skorne, switch sides and get everyone killed. (To be fair, it worked!) It also meant that I could run it in my sleep by Sunday morning, which is good, since that’s essentially what I ended up doing.

It’s my own fault really; myself and my roommate Charles both conked out early on the Saturday night, woke up at 2 a/m and said “fuck going back to sleep, let’s hit the Iron Arena.” The result was a leisurely game ‘twixt my Skorne and Charles’ Retribution – it had to be leisurely since neither of us could count reliably and one of us had lost the tape measure, resulting in a lot of bodged measurements with spray templates and widgets. It was… well, it was a delightful bloodbath. Praetorians fell like teardrops in the face of the Retribution’s firepower, and elves baked to a crisp beneath the shells of the Incendiarii. Charles’ feat turn saw my entire battlegroup slammed halfway back to the table edge and flat on their backs; mine saw a prized character myrmidon downed and the last Praetorians cutting swathes through the Houseguard infantry. Charles called it after that – with one battered warjack, five infantry models and a warcaster on fire, it wasn’t quite clear how the elves could punch through forty-eight wounds of Cataphract infantry to reach Makeda and avenge their dead.

Charles’ conservative, control-heavy, let-them-come-to-you-and-perish-before-your-awesome-firepower playstyle doesn’t transfer to roleplaying games, though. In the absence of players for the last demo session, we joined the Epic campaign on the other side of the hall, and… well, by the first round of the second combat Charles’ Stormsmith/Storm Sorceress was an unconscious heap in the corner, blacked out from racking up twice the recommended number of fatigue points and badly hurt from bouncing a blighted Nyss just far enough back for it to counter-charge her. I’m glad to say my Monster Hunter fared a little better… at least he managed to cut up a Nyss Sorceress before rocks fell and everyone died, quite literally. Last job for the day was to retrieve Charles’ entry to the Golden Thrall painting contest (shortlisted for the Single Miniature trophy) and crawl off for a curry and a well deserved kip.

Here’s the thing about SmogCon. It’s bloody expensive (I wouldn’t have been able to go if I hadn’t been splitting the room and food costs) even if you aren’t buying back into Privateer Press’ games in order to attend – but every time I go I remember that there’s more to PP games than tedious 50 point Steamroller tournaments where every millimetre counts and the army lists are built to win the games before they start.

One-day tournaments attract a particular kind of player. SmogCon attracts everyone. If you play anything produced by Privateer Press you’ll be able to play it there, and given that it runs non-stop from 9 on the Friday to 5 on the Sunday, you’ll be able to play a lot of it. Going to SmogCon is a breath of fresh air (as it were), and it turns me from embittered ragequitter to born-again fanboy every time.

By day, a mild-mannered small-town bookseller; by night, a tabletop supervillain with a thing for turn-of-the-millennium Warhammer. View all posts by Jon